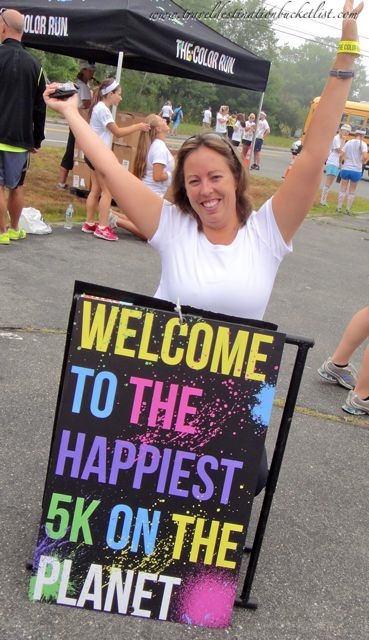 Nothing prepared me for the scene that unfolded as we walked to the start area for the 5K New England Color Run.  11,000 people registered for the event and bus loads of runners dressed in white were being unloaded at the registration and start area.  The excitement and buzz in the air was infectious.  Everyone was in a white shirt – the perfect canvas for the 10,000 lbs of colour that was about to be unleashed on the runners.  They started the run in waves of white – but those white shirts wouldn’t last for long!  There were people as far as the eye could see on the start line.  The music was rockin’, swag was being thrown into the crowds – it was only 8 o’clock in the morning and the party had already started! 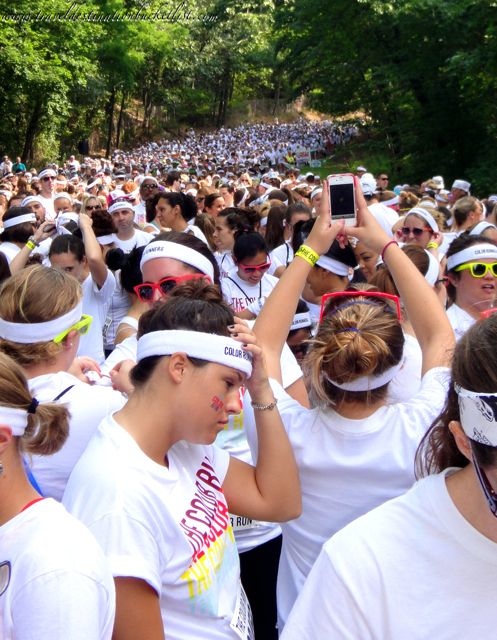 For the uninitiated – the premise of the color run was fun.  First held in 2011,the Color Run founder Travis Snyder wanted to create an event that would encourage people to get out and run just for the fun of it. He wanted people to enjoy the experience of running together, the camaraderie of the event, and to add something a little out of the ordinary to the race; something that could serve as a sort of visual reward for all the hard work these runners put in to training for the event.  I can safely say, he succeeded!  It was outrageous fun and I can’t wait to do it again. 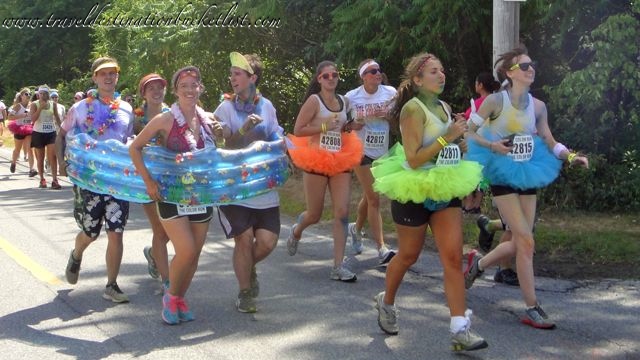 With the start of the race, color madness was unleashed on the masses.  Plumes of colour drifted in the air as thousands of runners giggled along the course.  Me – I am not a runner – so the run was all about getting the maximum color possible as I ran through each station.  People ran, walked and pushed strollers along the route.  Mid way, a man was out with his bagpipes.  I even saw a couple of colored dogs on the way home.  Locals came out and cheered us on from their front lawns – it seemed everyone was behind the fun. 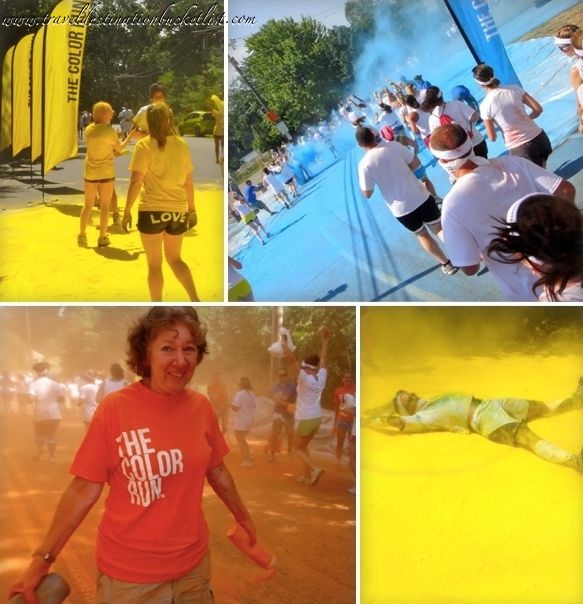 Every kilometer was a color station with energetic volunteers armed with bottles of powdered colour.  We started in the second wave and could see the colour clouds billowing up ahead.  It was the most fun chaos you could have in a run!  People of all ages, with costumes and tutus took to the New England roads in waves.  It must have been the easiest 5K ever – I barely noticed the distance as I jockeyed for extra squirts of color, my t-shirt and face a kaleidoscope of blue, red, yellow and green.

The color dust is completely safe, organizers say, although they suggest it is surprisingly high in calories and leaves a chalky aftertaste.  They were not wrong on the chalk – I had powder up my nose, in my mouth – I was sneezing blue that afternoon.  It stays with you for a while – 2 days later – I was still finding blue paint in my ear and yellow in my hair! 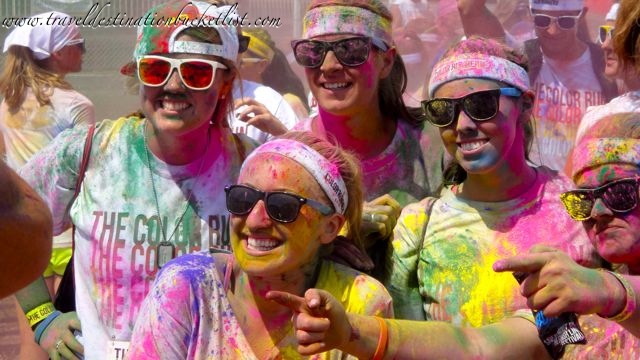 People continued to stream in after we finished.  The energy levels never went down as literally thousands of people, white teeth glowing in the faces of color, lived it up at the after party in the park.  The organizers really thought of everything – they had a photo booth set up with iPads so that participants could upload their photos to facebook or twitter.  They had a band pumping out the tunes, everyone dancing in the sunlight, colour packets exploding in the air.  Sponsors were giving out free drinks and granola bars – the coconut water was particularly refreshing after the run.

Tips after my first color run: 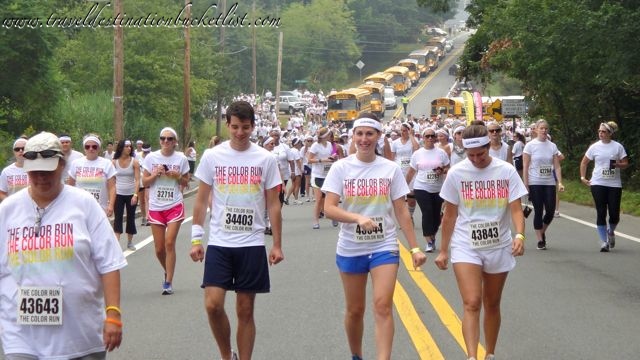 Get there early.  We lucked out – not knowing the area, I booked us into the Amesbury Marriott and was in walking distance to the start.  With no parking at the run, people parked off site and were delivered to the start line by bus.  I heard they had 45 buses shuttling people to the start – in one photo I caught the line of 8 full size school buses, all full of runners!  It was a sight to see.  There were people everywhere! 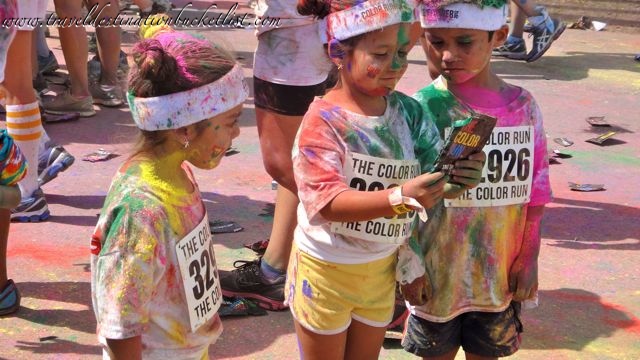 Be prepared to stay the day – we really had no idea how much fun we were going to have.  Don’t get me wrong – I was excited!  We had made plans for the afternoon, but I would have loved to have spent more time at the after party!  Next year, we will plan to stay longer.  They had tonnes of stuff to do at the Amesbury Sports Park!  A giant slip –n- slide, Zorb rides on the longest Zorb lanes in North America, summer tubing, a mechanical bull, and plenty of cold beer and hot BBQ added to the fun.  The DJ and live bands looked like they would keep the party going all afternoon. 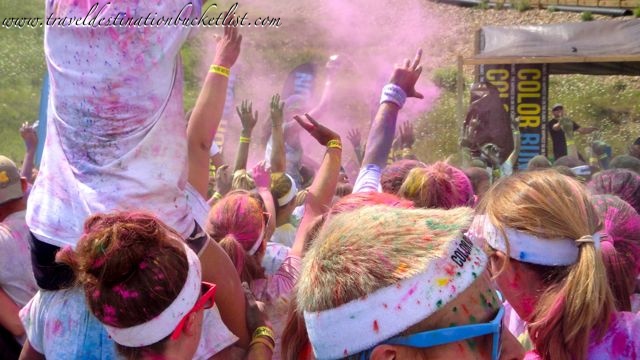 Such a vibrant event – have you done the color run?  I can’t wait to do it again!

The bucket list just keeps growing! The more I cross off - the more exciting new destinations and activities I find! I have been fortunate enough to travel a considerable distance over the years. My love of many things, including travel, cycling, kayaking and photography fit together like hand and glove. I have to keep asking myself....where to next? I am happy to share my travels and photography through my blogs: http://traveldestinationbucketlist.com and http://anitamacphotos.wordpress.com Hope you enjoy them as much as I do! On to the next adventure!
View all posts by Anita Mac »
« Monday Morning Series: Ben & Jerry’s
Boston’s InterContinental Hotel: Hotel Review »

Keeping up with RSS